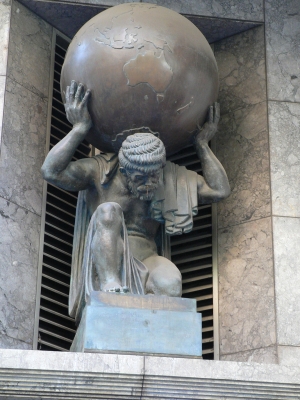 I always thought “atlases” — books of maps, that is — were named after Atlas, the Greek titan who carries the earth on his shoulders (see above). And it is indeed he who appears on an engraving of Tavole Moderne Di Geografia De La Maggior Parte Del Mondo Di Diversi Autori , a collection of maps published by Antonio Lafreri in 1572. However, it was Gerardus Mercator, the legendary map-maker, who invented the term and apparently he did not have the Greek titan in mind at all but rather “Atlas of Mauretania,” a famous philosopher, mathematician, and astronomer, who also was king of Mauretania.  Not very much is known about this man, however. Wikipedia has next to nothing.

“Mauri,” from which “Mauretania” is derived, was the Roman term for the Berber kingdoms of North Africa. But this is also where the Atlas mountains are located. In fact ádrār in Berber means “mountain.”  The Atlantic Ocean was named after Atlas and so was the lost island of Atlantis. Moroccans seem to have been great geographers. Ibn-Batuta was from Morocco too.

I put a twitter feed on this page and one of the first tweets that popped up was this:

We can’t save the Middle East. It’s called the #BarbaryCoast for a reason. These people have demonstrated what ‘#barbarian means! #Syria

I couldn’t help myself.  I had to point out to Sue that it’s called the “Barbary coast” because it’s the part of North Africa where the Berber people live.  “Barbary,” that is, refers to “Berber” not to “barbarian.” Few people realize this but North Africa is still predominantly Berber, not actually Arab.

@linreigu Hardly so! Existence of ‘Berbers’ fairly insignificant & coincidental in No. Africa. Where did you find this new version of history?

My new friend Sue is consequently wrong: there are some 50 million Berbers in the area.

A second question, and this is more interesting, is why the Berbers got their name. The reason it seems is that the Arabs who arrived in North Africa in the 7th century called them bárbaros.  This was the generic label which the Greeks applied to all foreigners.  They were “barbarians” since they stuttered and spoke incomprehensible gibberish — ba, ba, ba, ba.  “Barbarian” to the Greeks was not necessarily a pejorative term, but it was at the same time obvious to them that foreigners were not quite human. For one thing they had no poleis, no city-states.

“Barbarian” as a term applied to people who loot, destroy and in general fail to respect the lives of others caught on in Europe in the 18th century when it came to serve as the antithesis of “civilization.”  Yet the Europeans, as already Michel Montaigne pointed out, were often greater barbarians than the alleged barbarians themselves. I wrote a book about this.

Why did I think the Manchu were nomads? Two reasons really.  First of all since I took it for granted that all the various peoples living to the north and west of China itself were nomadic. Of course there were some, such as the Xixia, Jin or the Liao, who formed states during the Song period. Since they formed proper states they must have been predominantly sedentary, but I always thought of this as a “sinification” of what originally were nomadic tribes. Secondly, and most importantly, since the Manchu emperors of China always invoked nomadic traditions in their rhetoric — horse-back riding, archery and all that stuff.

So was Martin right? Well, as so often it depends on how we define the terms. The word “Manchu” itself was invented only in 1636 — once the invasion of China already was under way — and it was a political rather than an ethnic identity. More than anything it was used as a way for the leaders to rally various groups of people behind a common cause. Ethnically speaking, the Manchu were predominantly made up of Jürchen. By the Chinese authorities, the Jurchen had always been divided into three separate tribes of which the Yeren Jürchen — known as the “wild Jürchen” — were nomadic and the other two tribes were not. The sedentary Jürchen lived in villages north-east of Ming China, but they seem to have been more occupied with trade — in pearls, fur, and above all in ginseng — than with agriculture. All three Jürchen tribes descended from the Tungus people who were “sedentarized” some time in the 11th century, but hunting and fishing remained important occupations for all of them. I guess there was no other way to survive on the steppe.

China, we should remember, was overrun by an army and not by an ethnic group. The army was referred to as the “Eight Banners.” It was based on cavarly and archers, and was organized — much as the Mongol army of Genghis Khan — with the explicit purpose of uniting previously feuding factions. There were a lot of Mongols in the Eight Banners, together with Koreans and various nomadic peoples of the steppes. In fact, there were Han Chinese deserters and frontiersmen in the army too. The “Manchus” were more than anything the name for this military force, and the new rulers always counted themselves as its descendants. When the Qing dynasty emperors claimed an identity for themselves, they would always refer to this military legacy, including its strong nomadic elements.

There is first-rate scholarship on all of this, including: Mark Elliot, Evelyn Rawski and Pamela Crossley. Btw, the photo above is from an amazing web page on Manchu archery.

Seminars are a great way to learn things. Especially if we make our points clearly and take the opportunity to disagree with each other.

It seems ignorance and barbarism are about to triumph in Palmyra. It makes sense. ISIS’s version of the caliphate will always be an outrage for anyone who knows anything at all about history. Not even the Almohad  Caliphate was this bad. Yesterday they destroyed the triumphal arches in Palmyra, Syria, erected by the Romans in the 2nd century CE to celebrate their victory against the Persians. Previously ISIS have destroyed temples dedicated to Baal, a god of pre-Islamic Syria, which they regarded as idolatrous, but the triumphal arches have no religious significance. In fact, if ISIS had known more about history, they might have realized that they and the Romans both have the Persians as their common enemy.

A photo such as the one below reminds me of what it must have looked like when the Europeans destroyed the Yuanmingyuan. There must be a place in hell reserved for people who behave this way.

Very distressing images from the pilgrimage to Mecca this morning — over 700 were killed in a stampede at Mina, east of the city.  More here.  The tragedy occured during the “stoning of the devil” ceremony which forms a part of the series of ritual events all pilgrims are supposed to perform. The ceremony commemorates Abraham, the patriarch, who in the Muslim tradition visited Mecca on a hajj, pilgrimage, and was tempted by the devil. The devil appeared three times and Abraham threw seven stones at him each time. Symbolically, the stones are thrown at any one who dominates and tempts us — a political leader perhaps, or our own unruly selves.

The problem with stampedes occur since the location where the ritual is to be performed is unable to hold the enormous crowds that gather and since tradition has it that the last stone throwing should take place immediately after noon on the last day of the hajj. Religious scholars insist, however, that this is not necessary. In recent years the Saudi authorities have widened the bridge from which the stones are thrown and replaced the pillars that originally served as a target with a wall which is easier to hit and which stops the stones from hitting other pilgrims. Clearly, these efforts are not sufficient. In 2006, some 346 people were killed and and in 1990 some 1,426 people died.